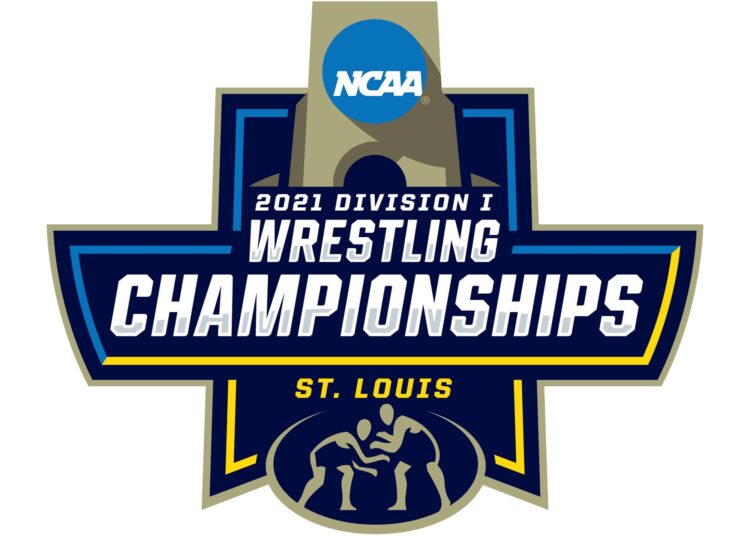 Nelson Brands at 184 was the only loss of the second half of session two as Iowa finished 18-2 for the day. Jacob Warner (197) and Tony Cassioppi (Hwt.) also advanced in the late session.

Twelve of the Hawkeyes’ 18 victories Thursday were with bonus points, including six major decisions, five technical falls and one pin.

Parker Keckeisen stayed undefeated at 184 and advanced to the quarterfinals for Northern Iowa, the second Panther to move on. No. 33-seed Austin Yant earned a consolation win.

125 pounds: Schroder proves Big Ten success was not a fluke: The 2021 Big Ten finalist earned a huge win against a conference foe in the second round of the NCAA tournament as he beat Michigan State’s Rayvon Foley to advance in the championship bracket. He’ll have Spencer Lee next in a rematch of the 2021 Big Ten finals where Lee teched Schroder in the second period.

141 pounds: Mr. March falls to Simon: Chad Red, the Nebraska star who has been known to catch fire at the NCAA tournament, dropped his second-round match to Dresden Simon of Central Michigan, as the Chips continue their impressive tournament. Simon held on for the 6-3 match to punch his ticket to the quarters, and he’ll see Jaydin Eierman next.

141 pounds: Real Woods is back: The 2021 Pac-12 runner-up scored a huge win against All-American Dom Demas in overtime with a savvy takedown that sends him into the quarterfinals as the No. 21 seed. That was a redemption match for him, as he needed a wildcard to earn a spot at this tournament but has now proven that he belongs. He’ll have All-American Tariq Wilson next.

149 pounds: Max Murin finds a way: The Iowa 149-pounder flies under the radar because of the ridiculous dominance of his teammates, but it’s clear that Murin is in the All-American conversation, and his performance in the second-round sent a message that he is not to be discounted or disrespected. Murin was gritty and tough in his 5-2 win over Ridge Lovett, and he’s the third Hawkeye into the quarters.

157 pounds: Berge prevailed in a battle of powerhouse programs: Any match between Iowa and Penn State is worth watching, but this particular match, the second-round 157-pound contest between No. 12 Brady Berge and No. 5 Kaleb Young was particularly exciting. Berge, who has had his share of injuries and has faced adversity throughout his entire wrestling career, snuck past Big Ten finalist Kaleb Young for the 3-2 win and major team points. He’s the third Nittany Lions to move into the quarters!

157 pounds: Hayden Hidlay is a bonus machine: The N.C. State senior picked up a technical fall in his second-round match, and he looked calm as ever doing it. Hidlay’s title quest continues.

Shane Griffith stays alive with a clutch third-period takedown: Luke Weber of North Dakota State nearly had the win over his Stanford 165-pound sophomore opponent, but Griffith never gave up. With less than 15 seconds on the clock in the final period, it was Griffith who found Weber’s ankles for a takedown on the edge to secure the victory and stay alive. He moves on!

Smith slows down Wittlake for the win: Ohio State has had an up-and-down day, but Smith gives the Buckeyes something to celebrate as he punches his ticket to the quarterfinals after a hard-fought 4-3 win over Travis Wittlake.

Battle-tested Ferrari moves on: The Big 12 Tournament Outstanding Wrestler continues to prove himself against elite level competition, fending off Tanner Sloan of South Dakota State 5-0 in the second round of the tournament, despite shots from Sloan and a fast-paced match. Ferrari is the real deal, and he’ll have his shot in the quarterfinals tomorrow.

Jake Woodley takes down Caffey: No. 26 Jake Woodley of Oklahoma picked up a big upset win against No. 10 Cameron Caffey at 197 pounds to set him up for the quarters.  Don’t forget the upset of the tourney… When #2 Eric Schultz (Neb) goes down to Owen Pentz (NDSU) that opened the door for No. 15 Michael Beard for a shot at the Semi’s.

Thor comes through, Bono jumps around: Wisconsin’s Trent Hillger earned a major upset over No. 3 Matt Stencel to earn his spot in the quarterfinals, and the junior Badger moves on. Hillger’s had an mixed year of results, but this performance shows that he’s back to be in All-American form and is ready to compete for a trophy.

Day 2 will be just as exciting! 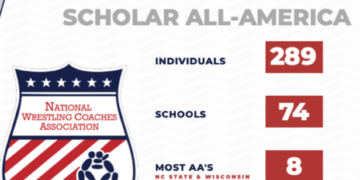 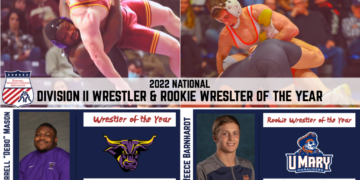 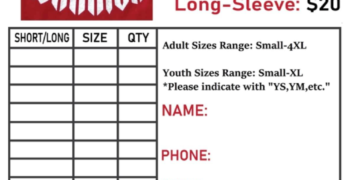 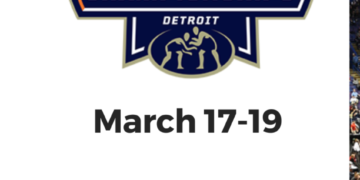